Dungeon Finder: Call to Arms ~ Heal or not to Heal 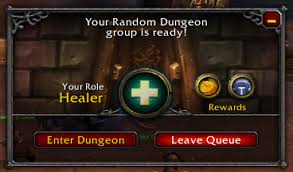 Everyone who’s anyone has heard about the new incentive to get tanks and healers into random dungeons.

In patch 4.1 we’ll be introducing Dungeon Finder: Call to Arms, a new system intended to lower queue times. Call to Arms will automatically detect which class role is currently the least represented in the queue, and offer them additional rewards for entering the Dungeon Finder queue and completing a random level-85 Heroic dungeon.

Now that incentive sounds pretty good to me, but will I be healing anytime soon?  I’m not sure, because of my past healing experiences.  Que flashback.

When I was first introduced to WoW I played a tauren shaman (Draenei didn’t even exist back then).  I level him up on my aunt’s account (she’s only 4 years older than me, yeah I know messed up family dynamics) unfortunately she was always playing which left me to try to get on for the 15 minute break that she took during those LONG SM runs.  When Christmas rolled around Santa brought me WoW which I quickly installed and rolled my Dwarf Priest, Chmelyk (Iharrypotter at the time).  The whole story behind the name was that all of my aunts friends (that I would be playing with) were named things like Icpthook or Itinkerbell so I chose the thing that I like.

Now fast forward to level 17 I was playing Chmelyk, my aunt was playing her rogue, and her Boyfriend was playing his warrior and our tank.  He was one of “those” tanks, you know the one that thought OOM meant out of mobs pull more, LoS didn’t apply to him, my heals were supposed to go through walls, he was the whole shebang.  Of course he died because I was a little-er kid (12ish If I remember correctly) and I wasn’t really good at the game.  He dropped group and hearth meanwhile throwing obscenities over his shoulder.  That was the first sting of healing that I felt.  Of course my aunt ran after him, and his friends that were running with us also left.  So I was left alone in the caverns of the Deadmines feeling like a failure. I got out of that place as swore I would never heal again! I hoped on a gryphon to Stormwind, marched right up to the Cathedral of light and demanded to be taught in the ways of the shadow.

Fast forward again to ICC and Sindragosa, I was the ONLY caster in the group so I got the debuff the whole time.  I was told I need to irk out more dps or I’d be replaced.  Eventually I was shoved into raid healing on Anslym so our priest could go shadow and do more damage.  Turns out he did less than me and I got put on dps again.  Now imagine going from a priest healing a level 15 instance to a resto shaman healing a 10 man raid at the pinnacle of the hardest boss with the most mechanics to avoid.  It wasn’t that bad but it wasn’t a nice feeling either.  I only liked healing VDW because she didn’t complain, move out of line of sight, and I never went OOM healing her, and she never dropped group if we failed.

Fast forward again to Patch 4.1 and the Dungeon Finder: Call to Arms.  I healed 1 normal random on Chmelyk which was alright, we wiped once and a few people died along the way.  I haven’t really healed on Anslym other than the loot bosses for holidays.  And I’m nervous to try to start healing.  I might run a few randoms with a good friend of mine Stalkuren resident healer in our guild (if it heals, he has it geared and ready for raids) and if worst comes to worst we could always switch.  I go elemental and he pops into healing.  What do you guys think?  Should I step out of my Dps box and try some healing or…..?